skip to main | skip to sidebar
January 2012 - Hello! Thank you for visiting this site... a rather rag-tag batch of writing and rambling.
I'm hoping to use this “Public Noise” site for some random expression and freak-outs. It will also collect short articles and reviews I've written for the LEO city paper, Magnet & other publications. Thank you to all the folks who agreed to be interviewed over the last few years - and the editors that have given me a chance to contribute. All the best – JN
_____________
PS: I've been in a cancer treatment program since August 2009 and my wife and I have shared some of that story at this address: http://www.caringbridge.org/visit/jasonnoble/ 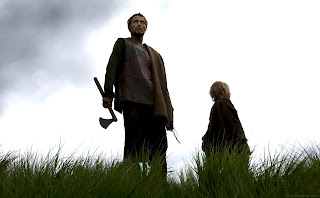 After a long break, Louisville’s dub/doom-rock ambassadors Seluah have reunited with a ferocious live show and a stunning new album, Red Parole. LEO spoke with Edward Grimes and Andrew Killmeier about music, films and why they both had a briefcase handcuffed to their wrists.

LEO: You’ve worked together since you first started making music with Oval in the ’90s and other artistic projects, like horror films.

Edward Grimes: Making music with these three guys has never been anything short of amazing. We grew up together, and shared similar dreams and influences musically.

Andrew Killmeier: We’ve all gone our separate ways, at times, and been influenced by our other projects (Boom Bip, Rachel’s, People Noise, etc). We bring these things back to the rehearsal space, but most of the music just comes from us and nowhere else. On the very best of days, I’ll plug in my guitar and it feels like I’m back in Edward’s basement in 1993.

LEO: After a hiatus of six years, what was the first “reunited” band practice like?

AK: Awesome. I hadn’t played an electric guitar in six years, or played music with anyone, period. It was like coming home again. Ironically, I don’t recall us really talking about getting the band back together. As soon as I moved back to town, we just started playing together as if nothing had happened.

EG: I wasn’t sure what to expect, but Matt and Andy basically introduced two songs that we immediately began working on, which became the first two tracks on Red Parole.

LEO: Seluah is sometimes compared to Massive Attack, DJ Shadow and Portishead, yet you operate more like a four-piece rock band, without a lot of playback or programming.

AK: I guess we’ve always liked slow, dark and heavy. We used to use a lot more electronic gear in our live shows (two samplers, two synths), but now we’re down to one keyboard that gets used sparingly.

LEO: It was surprising to see such a strong Black Sabbath/Neil Young/Iron Butterfly influence on the new album.

EG: Something was quickly evident when we got back together in August 2010, and we have Andy to thank for that. We all cracked up because he almost immediately said, “I’m not gonna be the synth/sampler guy anymore. I’m playin’ fucking guitar, damn it!” We all laughed about it, but he was dead serious. It kinda goes back to our roots … it’s a sound we’ve always loved.

LEO: The vocals are more disturbing — and haunting — than on your previous EP.

EG: Once I felt supported by my bandmates to strap on the Madonna headset mic and really commit to both singing and playing drums … I think there was maybe a little venom that wasn’t there before. Not having played music in a few years at all, and now being surrounded by three great guitar players will do that to you.

EG: “Seluah” is from Persian folklore. It’s a siren-like creature that drags victims to a drowning death.

AK: In a lot of ways, it’s just a pretty-sounding word.

LEO: Kevin Ratterman recorded your EP and the new LP. You really work well together.

EG: Kevin knows us as well as anyone (musically) and what we want. Also, it was as if all the analog gear he’s amassed over the years was just for us!

LEO: Film is a big influence for you all. What scores are essential for any listener’s collection?

EG: Ah, soundtracks! “Valhalla Rising,” “Red Riding,” “Zodiac,” “The Proposition” and “The Social Network.” Must listens: “Touch of Evil,” “Once Upon a Time in The West,” Kie´slowski’s “Three Colours Trilogy,” “Sorcerer,” “Sex Lies and Videotape.”

LEO: If David Lynch, Nicolas Winding Refn and Guillermo Del Toro joined forces to make the Seluah movie, who would play you (and your nemesis)?

AK: I’d like to see us all played by robots, except Drew would be played by the guy Steve Martin beats up in the bar scene of “Roxanne.” The Nemesis — Dr. Phil (playing himself). Somehow, the phantom from “KISS Meets the Phantom” would be involved.

To preview a track from Red Parole, visit www.soundcloud.com/seluah

Content as of 2011:
Interviews conducted by J Noble (published in the LEO Weekly and Magnet Magazine) with...

Denny O'Neil
Mono
Jeff Mueller
Steve Albini
Ben Jones
and other awesome people...
(the blog archives have these organized by month - or feel free to scroll down this main page to view all posts)